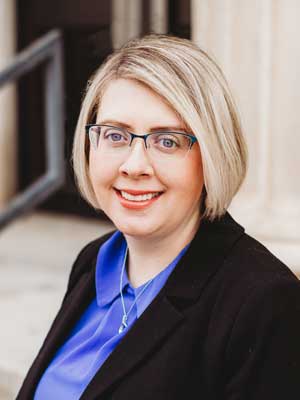 Kristen (Harper) Armstrong joined the Shepherd Elder Law Group, LLC on September 1, 2017. A native and current resident of Hutchinson, Kristen will manage the firm’s Hutchinson location.
Kristen graduated from Hutchinson Community College and earned a Bachelor’s degree (with honors) from Wichita State University in general studies, with an emphasis in gerontology. Kristen has eight years of legal experience, working as a paralegal and law clerk before and during her time in law school. Kristen completed her law degree at the University of Missouri – Kansas City School of Law in 2016. During law school, Kristen served as the president of the UMKC Estates & Trusts Society and was inducted into Phi Delta Phi, a legal honor society. Kristen is the only Reno County attorney who is a member of the National Academy of Elder Law Attorneys (NAELA). Kristen is also a member of the Young Professionals of Reno County and volunteers on the organization’s Voice and Connections teams and volunteers with 4-H youth.

Outside of work, Kristen and her husband, Stephen, enjoy spending time with their daughter and participating in local community events.