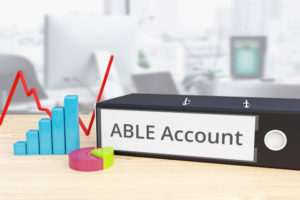 Only a small fraction of those eligible for new savings accounts for people with disabilities are using them, according to disability advocates.  If participation doesn’t pick up – either through better promotion or Congressional action, or both – some of these state-based programs won’t be sustainable and fees may have to increase.

ABLE accounts, created by Congress in 2014 and named for the Achieving a Better Life Experience (ABLE) Act, are a new tax-free savings vehicle allowing people to save money for disability related expenses without jeopardizing their eligibility for government benefits like Medicaid and Supplemental Security Income (SSI). As much as $15,000 annually can be set aside in an ABLE account, up to a total of $100,000, without affecting benefits eligibility.

Although an estimated 8 million people with disabilities are eligible for these accounts and nearly all the states now have ABLE account programs, only about 40,000 ABLE accounts have been opened nationwide from the launch of the first ABLE account in 2016 through March 2019, according a forthcoming report by the National Association of State Treasurers (NAST).

Meanwhile, a recent New York Times article cites a National Disability Institute estimate that by mid-2021, the five-year anniversary of the first ABLE account, 450,000 accounts will be needed to ensure the program’s long-term viability.

To boost enrollment, NAST strongly encourages passage of the ABLE Age Adjustment Act. Under the current ABLE Act, people are only eligible for ABLE accounts if their disabilities manifested themselves prior to age 26. The ABLE Adjustment Act would raise the age to 46, adding about six million to the potential pool of account holders, including some veterans and others who sustained injuries later in life.  Versions of this change have been introduced in both chambers of Congress the past three years, although the measure now has bipartisan support.

To further increase the popularity of ABLE accounts, NAST encourages federal agencies to be more proactive about promoting the accounts, as well as to issue rules and guidance to improve consumer confidence in the programs. The Department of Housing and Urban Development (HUD), for example, after many delays, finally released guidance in April 2019 clarifying that funds in ABLE accounts will not jeopardize a person’s eligibility for Section 8 vouchers and related housing programs.

For disability advocates, the slow take-off of ABLE accounts is largely an issue of education: many people still don’t know they are eligible to open ABLE accounts, or have misconceptions about their use.

“People don’t know what ABLE is. There’s a lot of fear of the government and a lot of distrust of losing government benefits,” Heather Sachs, policy director for the National Down Syndrome Congress, toldDisability Scoop. “What happens is one person has a bad experience at their local Social Security office and that fear spreads like wildfire.”