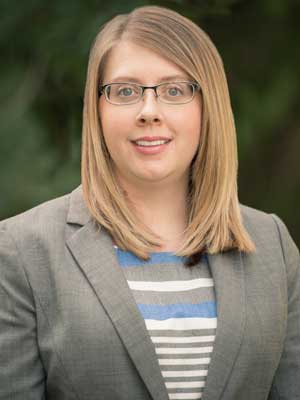 Kristen (Harper) Armstrong joined the Shepherd Elder Law Group, LLC on September 1, 2017. A native and current resident of Hutchinson, Kristen will manage the firm’s Hutchinson location.
Kristen graduated from Hutchinson Community College and earned a Bachelor’s degree (with honors) from Wichita State University in general studies, with an emphasis in gerontology. Kristen has eight years of legal experience, working as a paralegal and law clerk before and during her time in law school. Kristen completed her law degree at University of Missouri – Kansas City School of Law in 2016. During law school, Kristen served as the president of the UMKC Estates & Trusts Society and was inducted into Phi Delta Phi, a legal honor society. Kristen is the only Reno County attorney who is a member of the National Academy of Elder Law Attorneys (NAELA). Kristen is also member of the Young Professionals of Reno County and volunteers on organization’s Voice and Connections teams and volunteers with 4-H youth.
Outside of work, Kristen and her husband, Stephen, enjoy spending time with their daughter and participating in local community events.