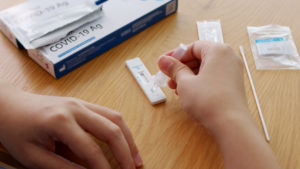 Americans’ ability to quickly and easily test for COVID-19 is one of the most important tools for stopping the infection’s spread.  This is why the Biden administration recently announced it is requiring private insurers to cover the cost of up to eight rapid at-home Covid tests a month purchased at retail stores and pharmacies.

But excluded are not just the 31 million uninsured Americans, but the nation’s 62 million Medicare beneficiaries – seniors and people with disabilities who are at highest risk of death from COVID-19.  And some Medicaid beneficiaries may be out of luck as well.

“I’m angry that senior citizens in this country are being ignored again, especially after digging deeper into our pockets for Medicare premiums,” Las Vegas resident Kathi Meci, 65, told CNN. “That is just so frustrating for me.”

The problem is that Medicare’s rules, which are determined by federal law, do not currently permit coverage of over-the-counter tests. And even if such tests were covered, it is unclear which part of Medicare they would fall under.  Medicare Part A covers hospital visits while Part B covers outpatient services like doctor visits, and neither is an obvious fit for the at-home tests.

Nevertheless, according to Kaiser Health News (KHN), some members of Congress are pressuring the administration to use the public health emergency to expand Medicare’s coverage, just as it did, for example, in changing rules to allow more widespread coverage of telemedicine visits.

“We know that the Medicare program has significant flexibility relative to the public health emergency, and it has demonstrated it has the ability to alter the rules,” David Lipschutz, associate director and senior policy attorney at the Center for Medicare Advocacy, told KHN. “We think they should find the flexibility to offer the Covid at-home tests for free.”

As things stand now, Medicare beneficiaries have limited free testing options, assuming they can find at-home tests, which are now in short supply.

Like any other U.S. resident, Medicare recipients can order four free tests from the recently launched covidtests.gov website.

“Four tests is not a lot of tests,” Juliette Cubanski of the Kaiser Family Foundation says in the KHN article. “This is one of the most at-risk populations, and to not have the opportunity to buy at-home tests and get reimbursed puts this whole population on their back foot.”

In addition, some Medicare Advantage plans may start covering free at-home tests.  Otherwise, Medicare recipients can get a test done at a lab with a doctor’s order, although this is not a good option for those who lack reliable transportation or are trying to steer clear of public places.  Beneficiaries also may be able to get one of the 50 million free at-home tests being sent to community health centers and Medicare-certified health clinics.

Medicare is well aware of the problem.

“This is definitely a priority,” a senior official at the Centers for Medicare and Medicaid Services told CNN. “We are actively working on it.”

Meanwhile, millions of Medicaid beneficiaries may also be unable to get free at-home tests.  While states are required to cover at-home tests at no charge, a January 24 letter more than 60 advocacy groups sent to the Biden administration says that “[i]t is unclear whether Medicaid allows for at-home tests from retail pharmacies or online without cost sharing.” The letter also notes that 3.5 million low-income individuals who are eligible for both Medicaid and Medicare but are enrolled in the Medicare Savings Programs would be excluded from coverage for the free tests.

For more from the Center for Medicare Advocacy on the pressure growing for CMS to cover the tests, click here.