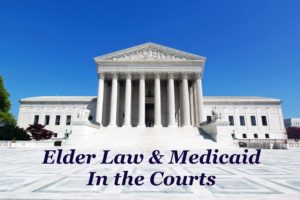 The U.S. Supreme Court has agreed to decide whether Florida can seek reimbursement for Medicaid payments it made on a recipient’s behalf from portions of the recipient’s personal injury settlement that are allocated to future medical expenses. The decision will resolve a dispute among lower courts.

Thirteen-year-old Gianinna Gallardo was struck by a vehicle and seriously injured. Her parents sued the parties responsible, and the case eventually settled for $800,000, or about 4 percent of the case’s $20 million value. Because Medicaid had provided $862,688.77 in medical payments on Gianinna’s behalf, her attorney advised Florida’s Agency for Health Care Administration (AHCA) of the settlement. The attorney also advised the agency that $35,367.52 of the settlement represented past medical expenses that were recoverable by the AHCA. Florida’s reimbursement statute uses a uniform formula in which the recipient’s gross settlement is first reduced by 25 percent to account for attorney fees, the remainder is divided in half, and the AHCA is then entitled to recover the lesser of its total medical payments or one half. Under this formula, the agency would recover $323,508.29 in medical payments from Gianinna’s settlement.

Gianinna’s parents sued the AHCA in federal court, seeking an injunction and a declaration that Florida’s reimbursement statute violates federal law because it allows the state to recover from the portion of her settlement beyond that allocable to past medical expenses. The AHCA argued that it was entitled to satisfy its lien from the portion of the settlement representing compensation for both past and future medical expenses. The parties filed cross motions for summary judgment, and the district court granted the Gallardos’ motion for summary judgment. The court found that, consistent with the U.S. Supreme Court’s decision in Arkansas Department of Health and Human Services, et al. v. Ahlborn (547 U.S. 268 (2006)), the AHCA is entitled to recover for past medical payments it made on Gianinna’s behalf only from that portion of the settlement allocated to past medical expenses. The AHCA appealed.

The 11th Circuit’s decision in Gallardo directly conflicts with the Florida Supreme Court’s decision in Giraldo v. Agency for Health Care Admin. (248 So. 3d 53 (Fla. 2018)). In that case, the Florida Supreme Court ruled that the Medicaid Act preempts Florida law and requires that the state only seek reimbursement from settlement amounts attributable to past medical expenses. Other state and federal courts have also disagreed on this issue.